What Does an Inverted Yield Curve Mean? 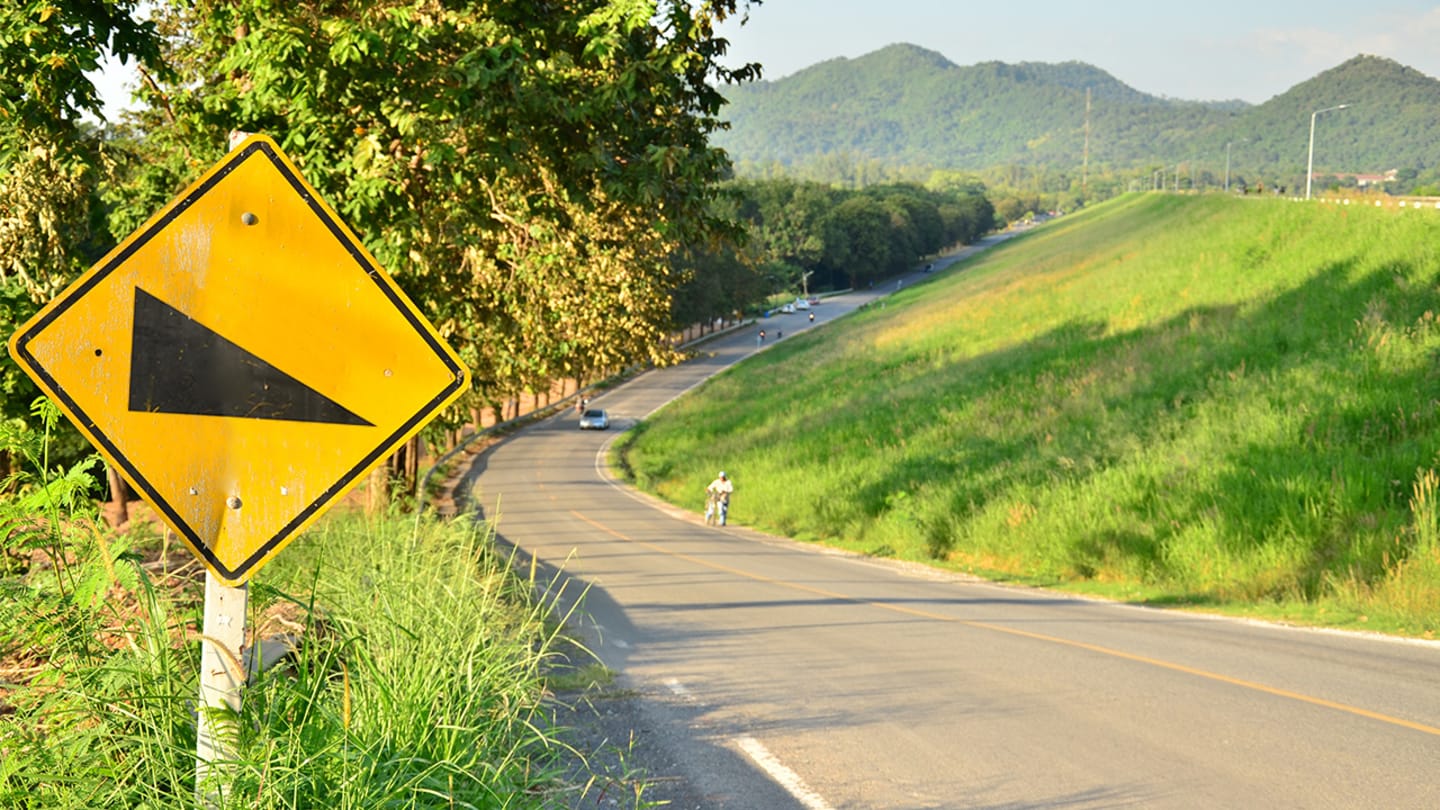 What Does an Inverted Yield Curve Mean?

While yield curves may not elicit the same excitement as watching a close sports game, many in the financial industry are paying attention to a potential looming “upset”—the prospect of short-term yields reaching higher levels than long-term yields—otherwise known as a yield curve inversion. A yield curve is a collection of interest rates for debts of various maturities.

Why do investors pay such close attention to this measure? Normal yield curves generally slope upward, as the cost to borrow money or the interest rate to lend money tends to be higher for the longer the duration of the debt—i.e., lenders demand more for taking on additional uncertainty. When short-term rates approach or overtake long-term rates, which is viewed as inflationary, potential concerns include:

Figure 1 shows the spread between the 10-year and one-year Treasury since October 1973. Inversions, or when the one-year Treasury was higher than the 10 year, are depicted in red. U.S. recessions are highlighted in gray. In Figure 1, we can see that many recent yield curve inversions preceded a recession. 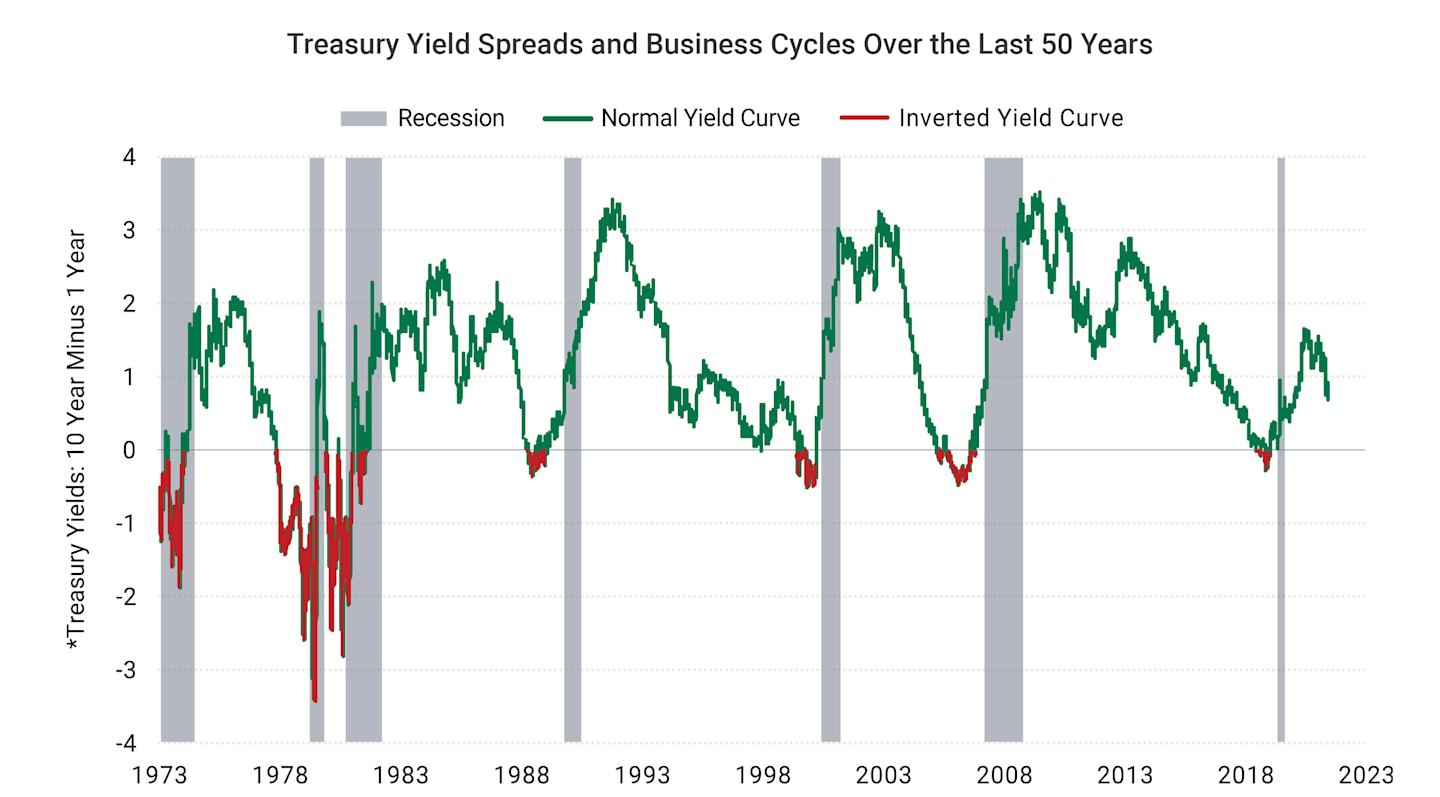 For one thing, while spreads like the 10-year Treasury minus three-month Treasury have recently been good “predictors” of a recession since the 1970s, if we extend our sample further back in time, we can note recessions (1957-1958, 1960-1961) where the curve did not invert, not to mention an inversion in 1966 where a recession did not occur soon after that.

As you may have often heard from economists, there is a stark difference between correlation and causation. In more plain language, just because events have happened close to one another in the past does not necessarily mean that one caused the other.

For those who may not be satisfied by the correlation-causation argument, we ran an experiment to see if there was any strong relationship between current yield spreads and subsequent stock returns. The following two figures display results for one shorter-term time frame and one longer-term time frame in different forms. There is no reason why we chose one form over the other for each period. We included the different formats as some readers may find one easier to interpret than the other.

Figure 2 is a scatter plot comparing daily yield spreads between 10-year and one-year Treasuries versus the U.S. stock market return over the next six months. Each dot represents a day.

Yield curve inversions are on the left side of the chart when the number along the horizontal (x axis) is negative. 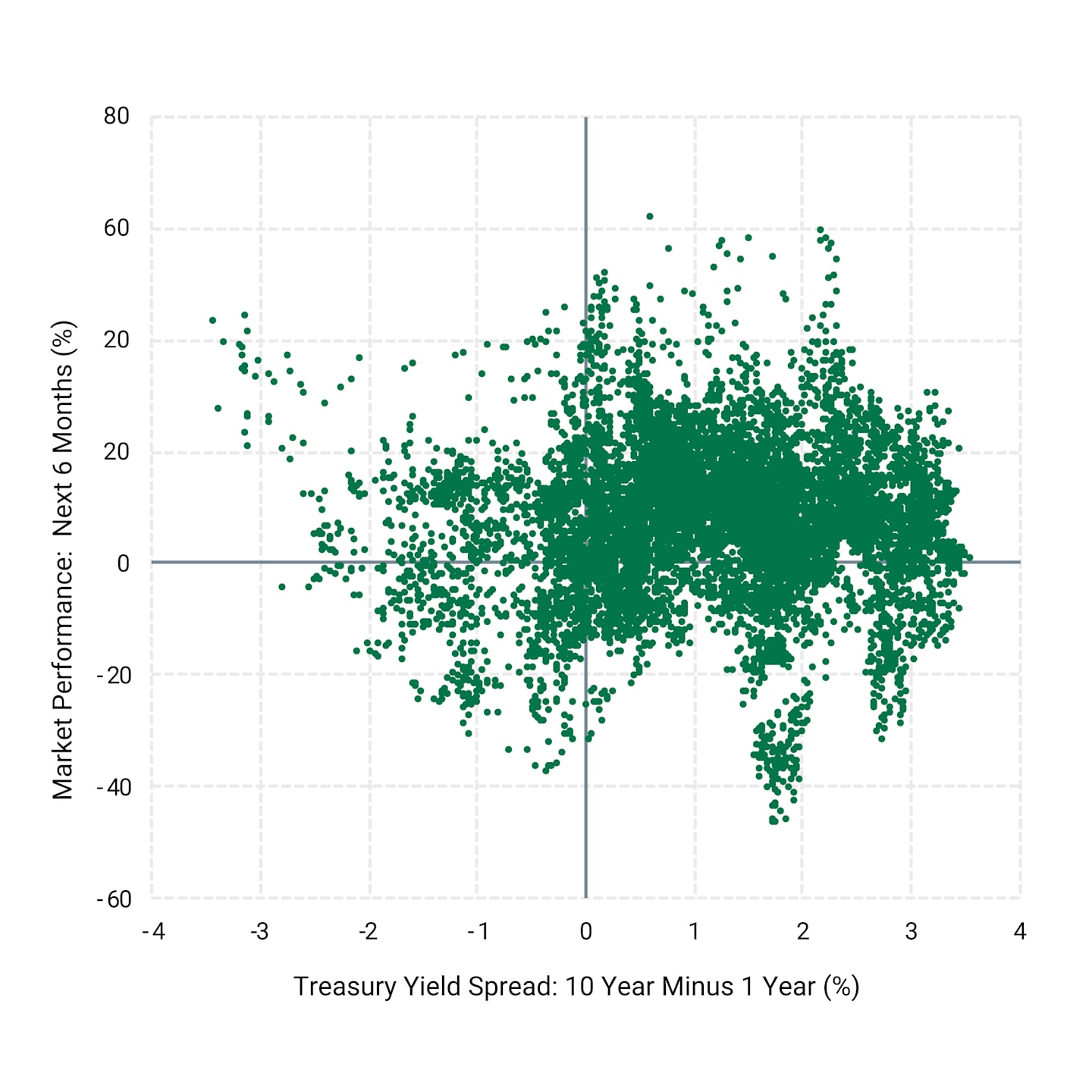 In Figure 3, we plot two lines. We have taken all the daily dots from Figure 2 and arranged them chronologically. The gray line shows the current yield spread over time, and the line is red when the yield curve is inverted (left-hand axis). The gray line shows the subsequent three-year U.S. stock market return (right-hand axis). Once again, we observe a lot of noise. There are many periods where subsequent three-year returns are positive, and several where returns are negative. We don’t see a strong relationship between these two variables over our sample period. 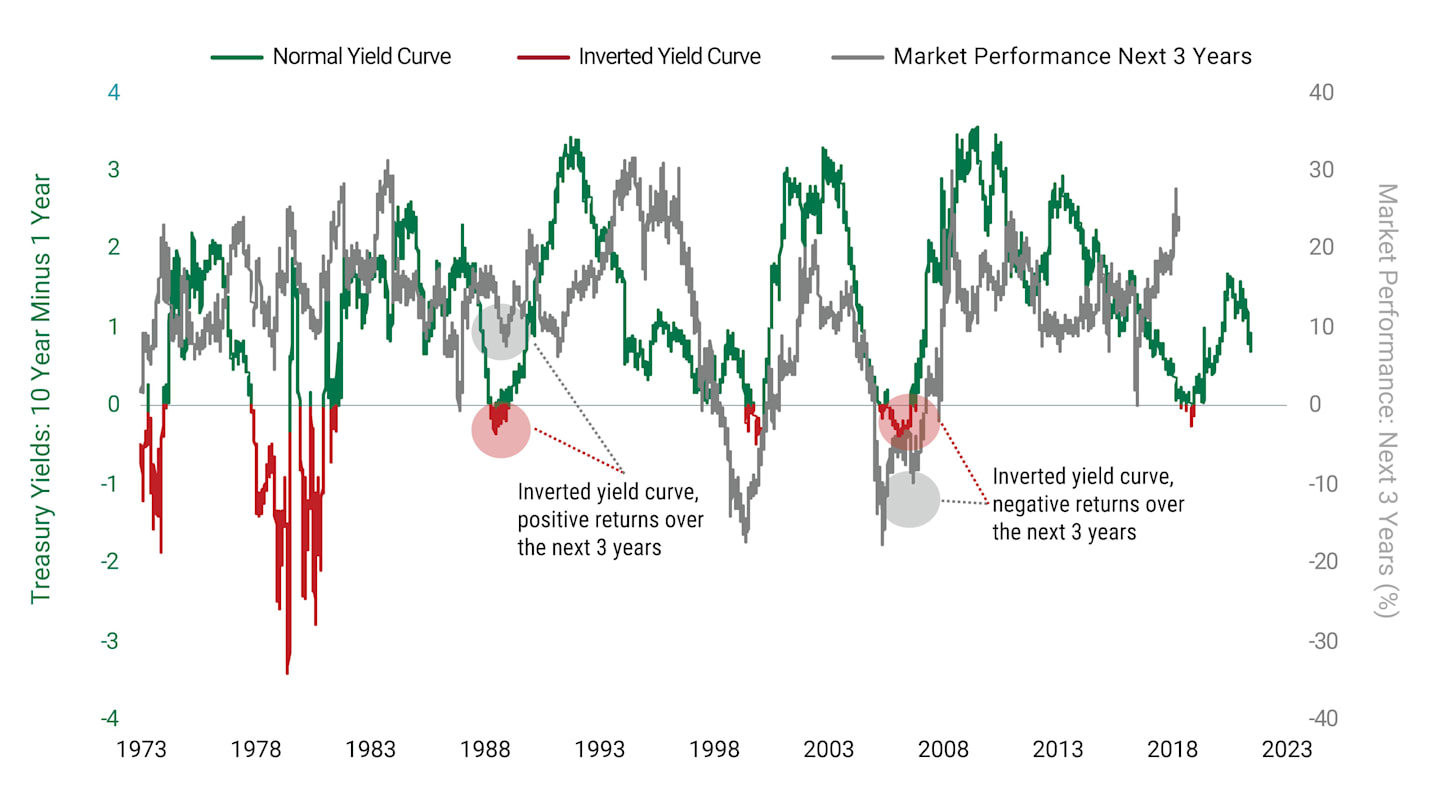 Be Wary of False Alarms

Does an inverted yield curve have economic implications? Perhaps. Should news of a possible yield curve inversion lead you to sell out of stocks? Probably not. Economists and practitioners use countless signals to make predictions about the future.

While there can be logical theories for how or why such signals provide us with certain information, as investors, we are likely better off remembering there is far more that is uncertain. Figure 4 shows that there have been market runs and drops in normal and inverted yield curves. 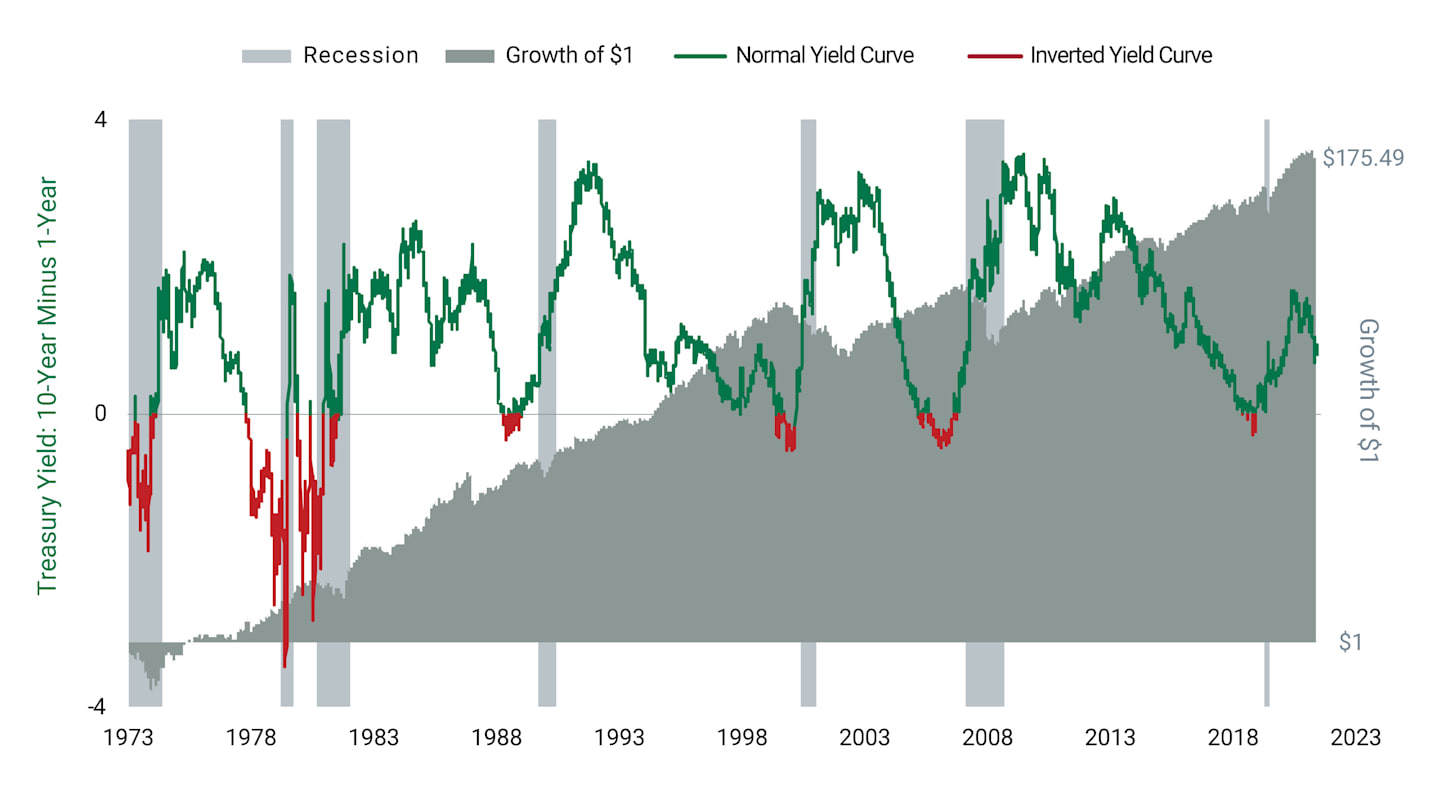 Uncertainty is something we must face, and while not always comfortable, we believe the ability to stay in your seat and remain invested provides the best chance for good results over the long term. Once again, this demonstrates how investors willing to stick with stocks over the long haul have historically been rewarded. 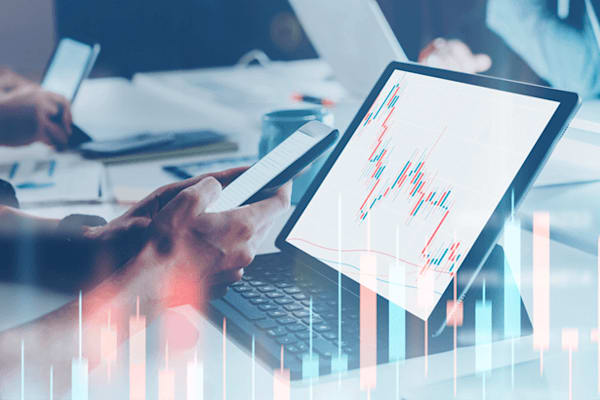 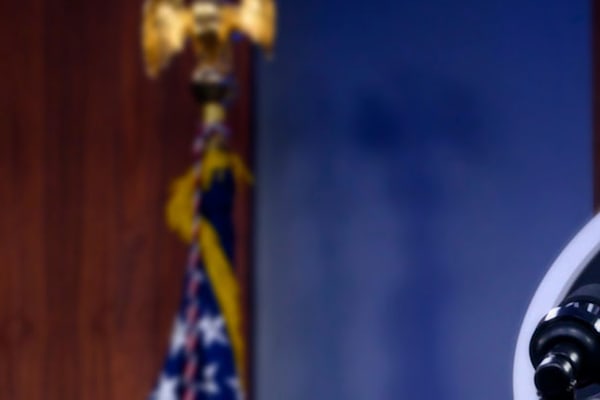 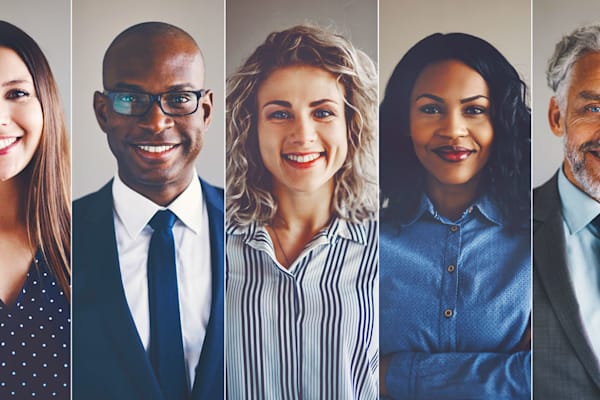 Index performance does not represent the fund's performance. It is not possible to invest directly in an index.